It’s Sunday morning, and that can only mean one thing: last night, I made and ate a hamburger. Specifically, a burger featured on the hit series Bob’s Burgers.The Cauliflower’s Cumin from Inside the House Burger [S4:E2 “Fort Night”]

About the Episode – It’s Halloween, and the kids have a plan to make it the best one yet: a group costume to maximize handouts, and they’ve included Darryl, who holds the coveted Treasure Trail map, to get the best candy. But the night doesn’t go according to plan, and they end up trapped in their own fort by Millie, Louise’s stalker.

About the Burger– This pepper jack cheeseburger included mashed cauliflower (with cilantro, lime juice, and cumin). 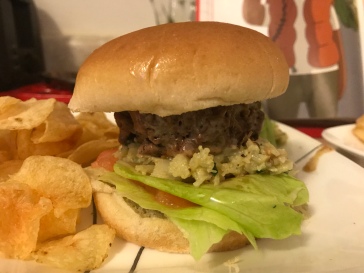 Krystal really liked this burger. She said I got the cauliflower texture just right and thought the cumin gave just the right amount of kick.

I liked the burger, but thought I could have mashed the cauliflower a bit more.

We gave this burger

Come back next week, when we’ll try a new, as-yet-to-be-determined burger!

One thought on “Bob’s Burgers Review: The Cauliflower’s Cumin from Inside the House”