The school year and basketball season have hit their stride and should remain there until sometime in mid-March.

With that in mind, the Wheel of Time has turned to

This week’s book is Jacksonland: President Andrew Jackson, Cherokee Chief John Ross. and A Great American Land Grab written by NPR’s Steve Inskeep. For those that listen to him on a daily basis, one can’t help but hear him narrate his own words.

The Truly Random Number Generator send us to page 199: 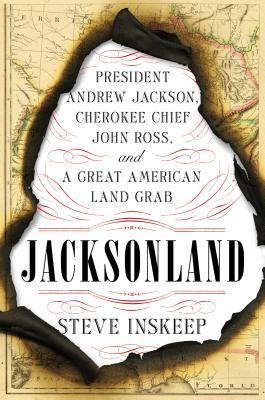 Although this book adds little new (if anything at all) to the historical record, it is both enjoyable and mostly readable – two qualities which may have helped it win the Pulitzer Prize.

My only fault is the author’s overuse of adjectives and certain phrases – after some time it felt I was reading a fluffed-up report.

The Color of Magic

This is both the first published Discworld novel & the first novel in the “Rincewind Cycle” – the series of Discworld books detailing the misadventures of the “wizzard” Rincewind.

If you picked up this book after seeing the film The Color of Magic, be aware that this book only covers the first part of the film; for the complete story, you’ll also want The Light Fantastic.

As this is the first book in the series, Pratchett spends a good deal more time (comparatively) discussing the actual mechanics of the Disc. Some may find this dull, while the more science-and-math minded may find such discussion downright enjoyable.

I personally find the Discworld series both witty and funny, but such accolades depend greatly on the individual. Much of Pratchett’s humor is dry and his wit relies on the readers’ knowledge of Earth’s workings and/or mythology.

The Color of Magic is fun as pure fantasy, but also contains splendid nuggets of joy for the more cerebral-minded.

Disciples: The World War II Missions of the CIA Directors Who Fought for Wild Bill Donovan by Douglas C. Waller