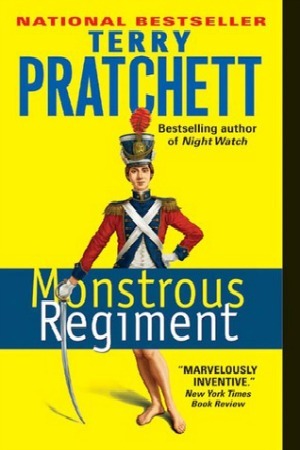 Like the comforting warmth of laundry right out the dryer, the Wheel of Time has turned ’round to Teaser Tuesday.

This week I anticipated teasing my friend Jordan’s second publication, The Last Day of Marcus Tullius Cicero. Unfortunately, Hurricane/Tropical Storm Hermine confounded Amazon’s two day shipping and, therefore, my reading plans. I suppose I’ll just have to tease it next week, eh? Or, in the words of The Office‘s Stanley Hudson:

At least I have something to look forward to.

So, I suppose this week I’ll tease my current Pratchett read: Monstrous Regiment.

Polly Perks joins the Discworld army to find her brother Paul. “Ozzer” cuts off blonde braids, dons male garb, belches, scratches, and masters macho habits aided by well-placed pair of socks. Legendary and seemingly ageless Sergeant Jackrum accepts her plus a vampire, troll, zombie, religious fanatic, and two close “friends”. The best man for the job may be a woman.

The Truly Random Number Generator sends us to page 215.

Both fun and informative, this book will likely please both Seinfeld fans and novices (like me). Three stars because sometimes the prose just dragged on and on without really going anywhere. Wait. Maybe I should give 4 stars for emulating the show . . . or not.

I’d intended to tease this book some weeks ago, but for whatever reason didn’t. Good thing, too. Here’s my review:

Disclaimer: I received this book in a Goodreads giveaway.

On the very last page of this book is the publisher’s mission statement, which begins with “Repeater Books is dedicated to the creation of a new reality.” Had this statement appeared at the beginning of the book, it would have saved me quite a bit of confusion and frustration.

Barely earning “book” status, this loosely related collection of rather poorly written essays claims to “rethink dissent in the Age of PR.” In reality, it does no such thing, but rather seeks to act as an apologia for the failure of Occupy Wall Street (and similar movements) to affect meaningful change. The author’s bias leans heavily toward outright prejudice, especially as she discusses the Tea Party. To summarize the author’s arguments: Occupy & Arab Spring = Good; IRA = Chaotic Neutral; Tea Party & ISIS = Evil. Spens has written a Millennial Manifesto of sorts, and it falls short of any meaningful contribution.

Perhaps the poor writing also explains the poor editing; I almost feel the editor couldn’t reject this work and just let it slide as presented.

An utter waste of time, this is one of the few I’d be just fine with burning for fuel during the Zombie Apocalypse.