Monday I started reviewing the books I haven’t reviewed yet. Here’s the next five.

Know It All Great Inventions: The 50 Greatest Inventions, Each Explained in Under a Minute by David Boyle 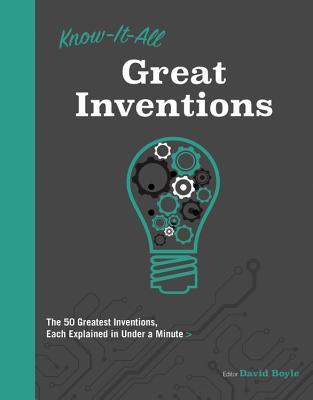 I received this book through Goodreads’ Giveaways.

This reference book lives up to its promise of explaining 50 inventions in under one minute each. Reading at my normal speed, I read each entry in 48:13:35. However, as the authors themselves note, the inventions aren’t explained so much as they are introduced; the work is intended to give a quick summary for the curious or a jumping off point for the more inquisitive. As such, this book is well-suited for the classroom.

I rated this work 3 stars for 3 reasons: First, it perpetuates the myth of the Dark Ages. Second, it lends begrudging credence to anti-vaccine movements. Third, it promotes the concept of man-made climate change, to the extent one feels the expert would rather inventions such as the internal combustion engine were never produced in the first place. All three of these stances are seen throughout the “3 Minute Overview” segments.

This book is a limited-edition, special-run publication for the Terry Pratchett exhibition at the Salisbury Museum. It contains nothing “new” for the Discworld fan in terms of story or character development, but it is a loving tribute to a wonderful man who brought joy and happiness and pleasure to so many. It may serve as an introduction to the Disc, as it gives a brief overview of many of the main characters and locales.

From Here to Eternity: Traveling the World to Find the Good Death by Caitlin Doughty

I loved When Smoke Gets in Your Eyes and Other Tales from the Crematorium. Doughty did not disappoint. Traveling the globe, she looked at – and, at times, participated in – funerary customs from a variety of cultures. Doughty brings a seldom-seen human element to after-life care. She makes it clear that what one chooses to do with their remains is of utmost importance. She reminds us that these deeply personal decisions are made for reasons not readily apparent to the outside observer. She makes us ask the important question “what do I want done with my body” and desires that we answer before someone else make the decision for us.

I am not a morbid person, but I am – to some degree – an Christian existentialist stoic. Memento Mori. Amor Fati. I often think about what will come hereafter, and what I would like done with my mortal remains. Thanks to Doughty’s book, I’ve begun the process of putting these wishes down in writing so others know both what I want and why I want it, so that, when the time comes, they can mourn and remember and heal without worrying they’ve “done the right thing”.

Collecting Shakespeare: The Story of Henry and Emily Folger by Stephen H. Grant 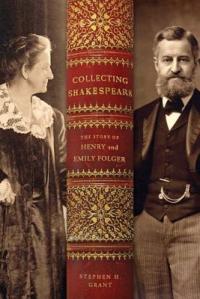 This book detailed how one couple built the largest (?) library in the world dedicated to Shakespeare. Short story: one man got lucky with (a) school scholarships, (b) marrying a wife who shared his passion, (c) landing a modest paying job and living below his means, and (d) making very lucky stock market investments.

The long answer is this book, and it is well worth the read. From colleges in late 19th century New England to oil barons to the sometimes unscrupulous world of book collecting and Congress, Briggs not only details how the Folger Shakespeare Libary came to be, but offers us a peek into upper-middle class America at the turn of the last century.

I’d tried to find a copy since I first saw a few episodes on TV or Netflix a while back, but my local bookstore and/or library never seemed to have a copy when I remembered to look for it. I finally saw my cousin reading it and he lent me his copy.

This is a fun alternative history of Georgian England, where magic one ruled the realm for three hundred years under the Raven King, John Uskglass. Since he left, magic has declined from being practical magic to merely theoretical magic. A prophecy foretells two men bringing about a return of English magic . . . and with it the Raven King himself.

However, Strange and Norrell’s respective personalities may doom them from the start: Norrell wants English magic to return after careful and thoughtful study of books; Strange wants to see just how far English magic can go based on pure will. Add to the mix a certain man with thistle-down hair who wants nothing more than bring misery to the human world, and events are bound to get . . . interesting.