Here I am gearing up for another Cross Country 5K. It’s raining right now, but supposed to clear off by race time. So, I have a few minutes to chat.

This was a long week, or so it seemed. Many students were back after being out sick, and it was Spirit Week leading up to Senior Night at the basketball game last night. Here’s a few of my favorite pictures from the week: 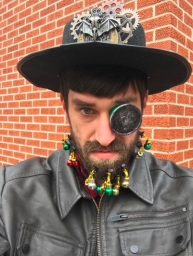 That first picture was for Twin Day, and I didn’t know I would have such a twin! We *just so happened* to kinda-sorta match.

The other pictures was for Homeroom Wars Day, where each of the homeroom classes pick a theme. My homeroom chose Pirates, so here I am as “Captain Rainbeard”. Somehow I picked up that title last semester – it’s a portmanteau of rainbow and Blackbeard.

Excitement is high and attention is low during Spirit Week.

Moving has brought about changes. Changes such as the fact that our lease includes basic cable. Now, for the first time, we have actual television, and just in time for the Olympics. Of course, this brings up the debate of what we should watch. I like curling, skeleton, and luge. Krystal likes the ice skating events. She graciously put up with 2 ends of curling, then we switched to men’s figure skating, and when that was over the Canada/USA curling match was still in its seventh end. I also made the mistake of trying to explain curling, which earned me a “OK, Sheldon” and an incredulous look.

Other changes include NOT having a dedicated internet line. Thankfully, the only time we need internet (as opposed do doing/watching things on our phones) is when I’m doing things like blogging, so our hotspot works fine for that.

What it doesn’t work fine for is hosting a podcast, so one of my projects is now on hold.

Thankfully, I can still participate in a podcast, I just can’t host it on my end, so that part of things will continue as normal. 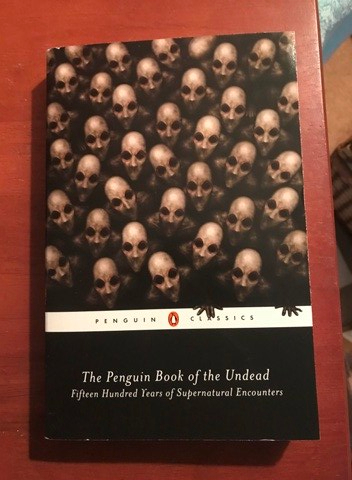 I mentioned previously about purging books as part of the move. Well, I’ve already started to fill what space I have thanks to Booksgiving, hosted by Jenny Lawson (aka The Bloggess). Someone graciously gifted me a book from my TBR, The Penguin Book of the Undead.

Not only was it a pleasant surprise on a Friday afternoon, but it was also my first piece of “real” mail at our new place. And, there’s my next Teaser Tuesday sorted out.

After the race, I supposed to do laundry. However, I have no clue where our laundry room is. I walked all over this morning looking for it with no success. We’ll see how this afternoon goes.

Tonight, it’s time for another Bob’s Burgers burger, so check back with me tomorrow to see how it went.