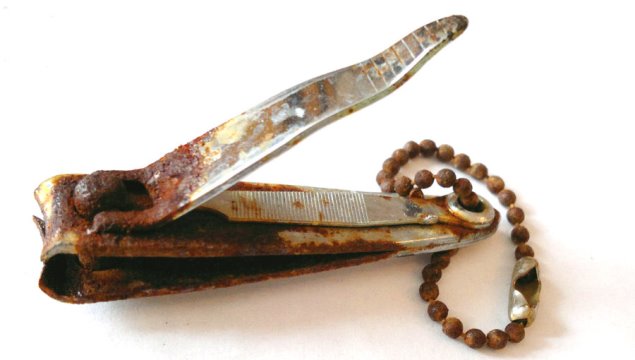 Krystal can’t stand the sound; my complaint is something else entirely.

It’s Monday and I haven’t had my coffee.

So, what’s my problem with trimming nails?

I can never find the nail clippers, which I talked about that before. Just how bad is it? My in-laws recently went to Canada, and the brought me back a key chain with a fold-out trimmer. Said the “thought of me” when they saw it.

And those are just my own nails. Trimming Smokey’s and Kona’s nails are tricky, too.

Smokey tolerates a few nails at a time, but I can’t let him know it’s coming.  I have to lull him into a false sense of security, lure him onto my lap (which isn’t that hard as it’s where he always wants to be these days), and then quickly trim a few nails before he gets annoyed and runs away. Repeat until all nails are trimmed. Last time, this process took me 2.5 hours.

Then there’s Kona, who screams bloody murder if you even hold him. Now imagine touching his paws and trying to cut his nails. It’s a two-person job. He’s not hurt though; once released, he’s back to loving you on his own terms. He just doesn’t like to be touched/held unless he asks for it. I can sympathize.

Well, that’s cats for you.

Thankfully, Indy is much calmer. He just wants to keep licking me while I’m working on his paws. Then again, he is a dog.