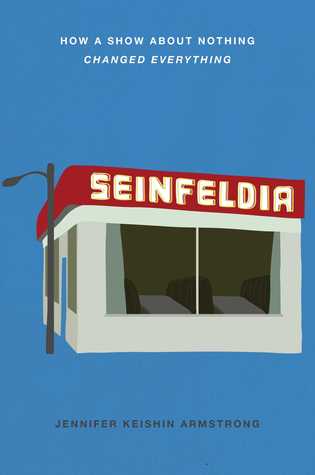 Like your favorite episode of your favorite show turning up in syndication, the Wheel of Time has turned ’round to Teaser Tuesday.

I was pleasantly surprised last week when, upon visiting the library, I discovered several books on my TBR on the Recent Arrival shelf. With the start of school I no longer have vast amounts of reading time, so I only picked up two of them. Last week I read The View from the Cheap Seats by Neil Gaiman; this week, it’s time for my other pick: Seinfeldia by Jennifer Keishin Armstrong.

Truth be told I’ve never seen much Seinfeld, but an interview on NPR intrigued me.

The hilarious behind-the-scenes story of two guys who went out for coffee and dreamed up Seinfeld—the cultural sensation that changed television and bled into the real world, altering the lives of everyone it touched.

Comedians Larry David and Jerry Seinfeld never thought anyone would watch their silly little sitcom about a New York comedian sitting around talking to his friends. NBC executives didn’t think anyone would watch either, but they bought it anyway, hiding it away in the TV dead zone of summer. But against all odds, viewers began to watch, first a few and then many, until nine years later nearly forty million Americans were tuning in weekly.

In Seinfeldia, acclaimed TV historian and entertainment writer Jennifer Keishin Armstrong celebrates the creators and fans of this American television phenomenon, bringing readers behind-the-scenes of the show while it was on the air and into the world of devotees for whom it never stopped being relevant, a world where the Soup Nazi still spends his days saying “No soup for you!”, Joe Davola gets questioned every day about his sanity, Kenny Kramer makes his living giving tours of New York sights from the show, and fans dress up in Jerry’s famous puffy shirt, dance like Elaine, and imagine plotlines for Seinfeld if it were still on TV.

The Truly Random Number Generator sends us to page 69.

Informative, intriguing, and entertaining, The View from the Cheap Seats book is a must-read for any Gaiman fan. I found some bits dry, like the many comic book introductions (as I’ve not read anything he talks about . . . yet) while others sections were real page-turners.

It was like becoming reacquainted with an old friend: some things I’d heard before but we’re pleasant nonetheless, and other stories were entirely new. I’m envious Gaiman got to meet/work with Douglas Adams and Ray Bradbury. Even after almost two years, I still wasn’t ready for Gaiman’s last line regarding Terry Pratchett: “I miss my friend.”

Now I’ve added to my TBR and TBW (To Be Watched), and I’m trying to convince my library to complete their Sandman collection.

My only real complaint is the American cover: why is it different than the English one, and why is it boring in comparison? We deserve the gear cover, too!