This is the 31st Discworld novel and the 3rd in the Industrial Revolution series. 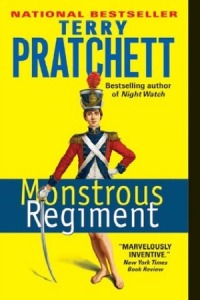 Where have all the young girls gone? Gone for soldiers, every one. The belligerent state of Borogravia has finally gone too far: they’ve torn town the Clacks towers and disrupted trade across the Disc. Beset by an alliance of their enemies (i.e. everyone), the nation fights a losing war they aren’t willing to end.

Enter Polly, unofficial barkeep of the Duchess, who enlists to find her brother Paul. She soon discovers she’s not the only girl to enlist, as others are looking for their love, revenge, or excitement. There’s also a religious fanatic who may be a bit more religious than anyone realizes.

Now, they’re Borograzia’s last hope, if not for success, then at least for a reasonable surrender. The question is: how long can they keep their secret from Sergeant Jackrum?

Polly Perks joins the Discworld army to find her brother Paul. “Ozzer” cuts off blonde braids, dons male garb, belches, scratches, and masters macho habits aided by well-placed pair of socks. Legendary and seemingly ageless Sergeant Jackrum accepts her plus a vampire, troll, zombie, religious fanatic, and two close “friends”. The best man for the job may be a woman.

The place was one of those nowhere villages that existed only in order to avoid the embarrassment of having large empty spaces on the map.

You take a bunch of people who don’t seem any different from you and me, but when you add them all together you get this sort of huge raving maniac with national borders and an anthem.

The crowd parted instantly, because trolls never had to stand at the back of the press of bodies, waving money and trying to catch the barman’s eye.

There have been better attempts at marching, and they have been made by penguins.

People see what they think is there.

It’s amazin’ what mustard’ll help down.

Folk singers should be shot.

He gave her what is called an old-fashioned look; this one had dinosaurs in it.

I am a bundle of suppressed instincts held together by spit and coffee.

If you couldn’t trust the government, who could you trust?

‘Pretty please with sprinkles on top’ is not a recognized method of interrogation!

The presence of those seeking the truth is infinitely to be preferred to those who think they’ve found it.

There was an old, very old Borogravian song with more Zs and Vs in it than any lowlander could pronounce. It was called “Plogviehze!” It meant “The Sun Has Risen! Let’s Make War!” You needed a special kind of history to get all that in one word.

Blows to the head are potentially harmful and should not be undertaken lightly.

When it comes to cunning I am Mister Fox.

You are steeped in deviousness, cunning and casual criminality, Sergeant Jackrum. You should do well.

Revenge is not redress. Revenge is a wheel, and it turns backwards.

Armies don’t do much for agriculture except marginally raise the fertility of the battlefield.

You think you’re the hero, and it turns out you’re really part of someone else’s story.

Previous: The Wee Free Men | Next: A Hat Full of Sky