Yes, dear reader, you read that title correctly. I’m a Con Man . . . Wait. Strike that. I’m a Supercon Man! No, I’m not out to trick the elderly and the gullible out of their life savings. I’m interested in comic cons, and this past weekend Krystal and I were able to attend the Raleigh Supercon.

The Con began on Friday, but due to other obligations we weren’t able to attend until Saturday. So, we woke up early and made the 2-hour drive, making good time thanks to a new bypass until our GPS told us we were 0.8 miles from our destination. At that point we hit traffic for the Con and spent roughly 40 minutes inching our way off the highway and into one of the last parking spaces in the parking garage nearest the convention center.

Now, the line for tickets at the door was practically nonexistent. However, we’d purchased out tickets in advance, so we had the privilege of waiting in this line. Krystal took this picture after we’d already been waiting for ten minutes. I must say that once the doors actually opened the line moved quickly – for us, at any rate. By the time we made it through check in and prop check, the line stretched around nearly three sides of the building. Needless to say, we were really glad we didn’t arrive any later.

Speaking of prop check, Krystal did an amazing job on our weapons for Saturday, as evidenced by the reaction of the prop man. He thought Krystal’s angel blade was made out of tin foil or some other metal, when in reality it was just foam and silver paint. I’m not sure what he thought my First Blade was made of, but I nearly died when he tried to bend it. I cut him off quickly, telling him to be careful as it was just clay over a Dollar Tree plastic knife and would snap easily. Thankfully, no harm was done. 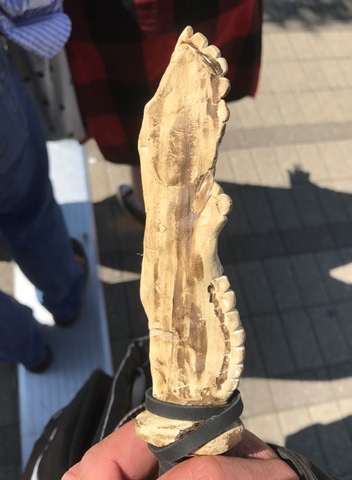 After navigating two sets of escalators and two additional security checks, we finally stood above the main hall – a glorious sight to behold.

We had a blast wandering the exhibits, talking with vendors, and – of course – meeting other cosplayers. It never ceases to amaze me how inclusive cons are – how supportive and enthusiastic everyone is about everyone else’s costumes, and their willingness to take pictures with literally anyone and everyone. If there are any negative folks out there, they seem to be few and far between. Krystal and I have a bad habit of taking pictures with other people but rarely getting the same picture ourselves. Somewhere, out there on social media, are dozens of pictures of us – we just can’t find them. Come on people, use the hashtag! Anyway, here’s some of our random pictures from Saturday: 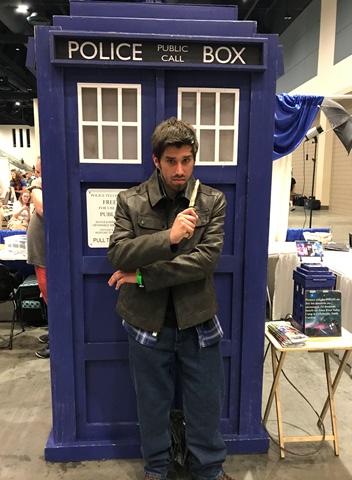 We even ran into other people in our fandom, playing entirely different characters! We *almost* had the whole of the main crew: 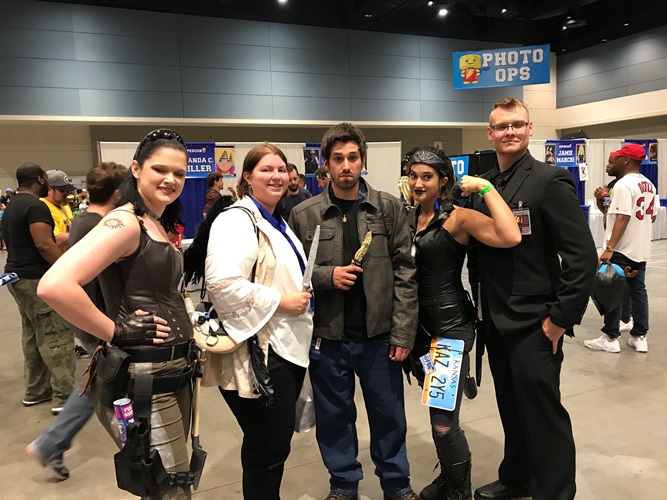 We met this wonderful woman in the Alex Kingston photo op line. She had the tea service and a little voice recorder that said “Would you like some tea?” What made it even more amazing was that the recording was done personally by Nick Briggs; she had a longer version including her name. How neat! It just occurred to me you might not know who Nick Briggs is: he is a voice actor who provides voices for many Doctor Who monsters (like the Daleks). Even if you don’t watch Doctor Who, if you saw the Lego Batman Movie, you heard him.

If you’ve never been to a convention like this before, you can spend a lot of time waiting in lines. Lines for photo ops, lines for autographs, lines for food. Make friends with the people in your line, chances are you’ll be with them for more than a few minutes.

The chaos of the Alex Kingston photo op was so totally worth it for this picture: 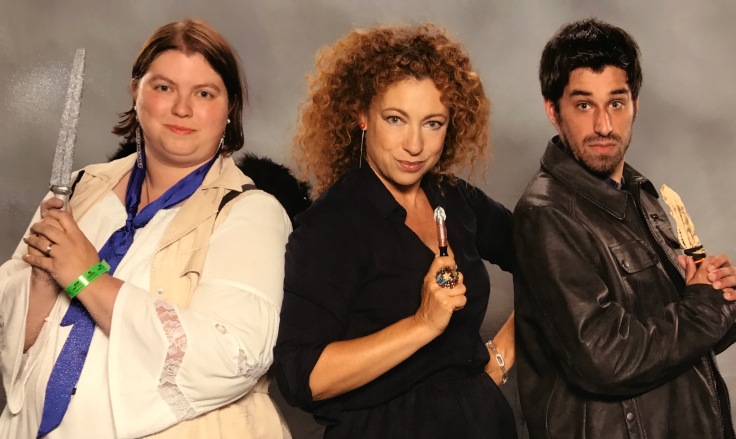 She is much taller in person than I expected her to be, and her hair is really that big – maybe bigger. It is amazingly glorious. She graciously did a Charlie’s Angel’s-esque pose with us, and complimented Krystal on our wings. I was too giddy to say much of anything. (Fear not! I rectified that situation the following day!)

Krystal met up with some friends of ours for a Michael Rooker panel, so I wandered the convention floor by myself for a few minutes before heading to a panel on the psychology of villains and why we like/relate to them so much. I found David Lloyd’s booth and had him all to myself for ten whole minutes talking graphic novels and V for Vendetta. Huzzah for *free* autographs! 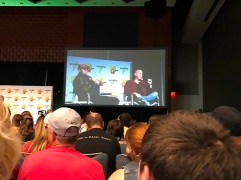 We both went to the Justin Roiland Q&A, voice actor of Rick and Morty on Rick and Morty, Earl of Lemongrab on Adventure Time, Oscar of Fishhooks, and various minor characters on Gravity Falls. It was funny, interesting, and informative. Later, I stood in line for his autograph (yet another organizing fiasco) while one guy became progressively drunk to the point he started hitting on me. Thankfully, his friends in line weren’t such jerks and did their best to distract him. Justin was incredible to his fans, staying long past his time slot to meet us. He even took questions in line, and I asked

He said he’d never been asked that before, and that he’d have to think about it because it had potential for really influencing the character. w00t!

Then it was time for the Cosplay Competition: 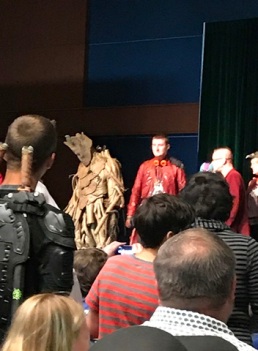 It was at the contest we found out that Raleigh Supercon was trending high on social media, and was taking the top spot for any geek event/topic that weekend. WE BEAT D23 Y’ALL! Take that, Disney – you took Karen Gillan from us, we’ll take your trending spot.

We wanted to stay for some of the night panels, but we were getting tired after going nonstop all day, so instead we headed back to our hotel and ordered a pizza.

It was time to get some rest for the next day.

[NOTE: I’m going to split this into two separate posts so I can comply with WordPress’ tag guidelines. Read the next installment here!]