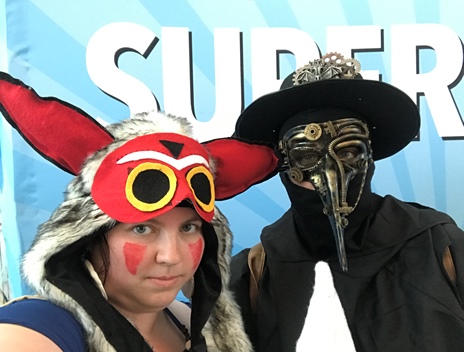 This is a story I forgot to tell you about Raleigh Supercon.

So, you might remember that we stayed in a hotel just across the street from the convention center. Unfortunately, we couldn’t park near the hotel as the nearest parking garage was full to capacity and I wasn’t going to pay for valet service. So, we ended up leaving the car where we’d parked it that morning, about three blocks away.

That meant that I had to take all our luggage to the car before actually putting on my costume for the day, a steampunk plague doctor. Luckily, my costume was made of layers, so I didn’t have to haul luggage that way. I did have to bring some costume elements back with me, which made for some interesting interactions as passerby thought I was a male version of Princess Mononoke. As awesome as that would be, no, that wasn’t me. 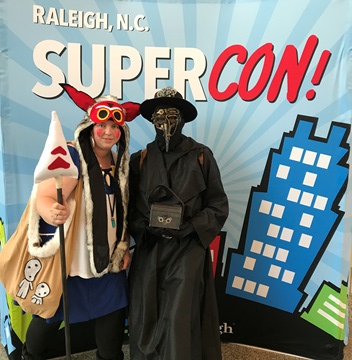 Anyway, back to the story. I was headed down with our luggage and shared the elevator with a family with a young daughter – she looked to be about five years old. They weren’t going to the convention, but had seen people in costume during their stay. They asked me about the convention, what I’d done, who I hoped to see, and about my costume. I told them I still had to put my costume on, but that I was going as a Plague Doctor. They seemed interested.

Fast Forward an hour or so. Krystal and I have changed into our cosplay and head down from the 9th floor to the front desk. The mask eliminated 50% of my peripheral vision and I worried about the hem of my robe catching in the elevator and escalator. (Cue all the women saying “Oh honey, you have no idea”. I know they’re thinking this because my wife said something similar.)

Anyway, we successfully check out after the woman behind the desk gushed about our costumes, and who should I see across the lobby but that same family. Not thinking, I wave at them only to be met by less-than-certain looks. Then I realized I looked entirely different.

So, I said to them, “I talked to you in the elevator!”, which caused a breakout of smiles. Upon hearing my voice, the little girl ran over, hugged my leg, and said “Picture! Picture!”. And here I thought I’d scare her.

Mainly because I looked like this, which is not normally conducive to hugging. I think.

I wish I’d thought to get a picture on my phone, too.

One thought on “The Girl at the Hotel”