Like a couple trying to decide where to have supper eventually settling on “the usual”, the Wheel of Time has turned ’round to Teaser Tuesday.

Wonder of wonders and miracle of miracles – I’m still ahead of my Goodreads challenge! That’s probably due to the fact I was at a teacher’s convention last week and had a bit more free reading time than usual.

This week I’m excited to tease The Pietist Option by Chris Gehrz & Mark Pattie III, and today just so happens to be Publication Day! Huzzah! Some time ago I stumbled on Chris’ blog, The Pietist Schoolman and participated in a discussion on what a genuine Christian “hope for better times” would look like. Fast forward two(ish) years from that discussion, and here we are, celebrating the printed version of that discussion, now called The Pietist Option. Yes, there was a name change to correlate to Rod Dreher’s controversial Benedict Option.

I was privileged to read the manuscript back in July, and holding the printed copy in my hands is thrilling. I can only imagine what emotions the authors experienced!

The Truly Random Number Generator sends us to page 37: 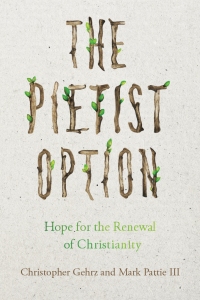 And now, the official review!

A Review of The Pietist Option

Two years ago, I began listening to a podcast called The Pietist Schoolman. Though the podcast is now on an indefinite hiatus, I subscribed for two reasons: it was part of a larger podcast network I enjoy (the Christian Humanist Radio Network), and it contained that intriguing adjective “Pietist”.  To that moment, I had only encountered Pietists in history: August Franke, Philipp Spener, Nicolas von Zinzendorf. I knew of denominations in the Pietist tradition (Anabaptists and Mennonites), but held no inkling such men and women existed in the present day; at least, in any significant numbers. To my delight and surprise, I was wrong.

In the Pietist Schoolman series, Chris Gehrz, professor of history at Bethel University in St. Paul, Minnesota, outlined a Pietist vision for academia. I found myself drawn in, though not fully converted. In season two, he introduced Mark Pattie and their plans for a new work they called “Hope for Better Times: Pietism and the Future of Christianity”. Now called The Pietist Option, the book will be available from InterVarsity Press this October, in advance of which I have had the privilege of reading and reviewing the result of their labor.

Christianity in America is divided. Some Christians demand greater political authority, with a nationalist view that borders on idolatry. Others call for a retreat into our own communities, not unlike the cloistered clergy of a different age. Many stand somewhere in between these two extremes. In this cacophony of competing voices, Gehrz and Pattie quietly remind us that “Pietism calls people back to Jesus when and where it’s most needed—whether seventeenth-century Germany or twenty-first-century America.”

If Pietism is an answer, where has it been? “Evangelical” and “Fundamentalist” are common qualifiers; “Pietist” remains an unknown value. To quote the authors “Pietism has disappeared not because it failed, but because it succeeded. . . Pietism can work its way into a Christian movement, enhancing what’s already there while leaving few traces of itself.” After reading The Pietist Option, I am inclined to agree, finding traces of Pietism in Episcopalians, Pentecostals, Brethren, and Baptists. However, Pietism in and of itself is simply a means to an end, and not an end in and of itself.

What, then, is the end to which Gehrz and Pattie point? First, to be “honest about our failures to love God and neighbor, in the hope that we will grow in God’s grace.” Second, to live “as if Jesus Christ has actually conquered the grave.” Third, to hope for a better future. Fourth, to resist “both our inner inclination to go our own ways and the ever-more-sophisticated voices of marketers, politicians, and activists who would separate us out into flocks of our world’s making.” Fifth, to “engage and enliven one’s head and heart and hands.”

Themes of community, neighborhood, inclusiveness, justice, compassion, and mercy run throughout the book. The authors seek common ground for a vibrant, living Christianity focused on Christ, and not denominational differences.

Somewhat ironically, if there is fault to be found, it is here, where the authors write that “perhaps common experience and common activity are healthier bases for unity than common belief”. Based on this, one might accuse Gehrz and Pattie of advocating a type of empiricist-faith hybrid, which would be no faith at all. Some might also accuse them of being ecumenical or pluralistic. I think, taken as a whole, both charges are baseless. However, I will let the authors speak for themselves on this matter in both this and their other writings.

I would recommend this book for any Christian seeking a way forward in the current political and cultural climate. The book will not provide all the answers, nor does it claim to provide them. In fact, the book appears to contradict itself at times.

In the end, I am reminded of William Butler Yeats’ “The Second Coming”:

Turning and turning in the widening gyre

The falcon cannot hear the falconer;

Mere anarchy is loosed upon the world,

The blood-dimmed tide is loosed, and everywhere

The ceremony of innocence is drowned;

The best lack all conviction, while the worst

Are full of passionate intensity.

Many would find these sentiments as true today as they were in 1919, with one important exception: the center can hold, if that center is Jesus Christ. Chris Gehrz and Mark Pattie guide us to that center.