So I know it’s not exactly morning anymore, but the coffee’s still hot and your usual spot is waiting.

Can it really be March already? I suppose it must be. And, true to form, March has come in like a lion.

Specifically, a lion with hurricane-force winds, bringing down trees and causing power outages.

Last weekend saw a flurry of activity as our complex’s maintenance crew came to fix our heating and air and ended up replacing the entire system! I know the weather’s been hot for February, but it shouldn’t have been 80-degrees-indoors hot. Now it’s a much more manageable 70.

Krystal hasn’t been feeling the greatest but her work has been extremely kind and understanding. My heart is full knowing how much she’s appreciated by her coworkers.

For as much as she says Smokey doesn’t lover her because he’s always sitting on my lap, Smokey’s showed her a great deal of concern. He’s laid outside her door as she rests and even when he’s downstairs with me, he’ll go upstairs every so often to meow at her. When she responds, he’ll give a little chirping meow and go on his way.

But she is right; Smokey really does prefer sitting on my lap. Today he’s been asking me for an hour to sit down just so he could jump up and curl for a nap.

This week began the Manifest Destiny section of the American History I section. Out came 1990’s “Oregon Trail”. Surprisingly, they embraced the now-vintage graphics and text-based gameplay. They decided to lead by committee, elected me to be their hunter, and successfully brought an entire party of five into the Willamette Valley. They even placed 6th on the online emulator’s leaderboard, insisting I use the name “Cpt. Rainbeard” – the nickname I somehow earned while discussing pirates in the Americas. 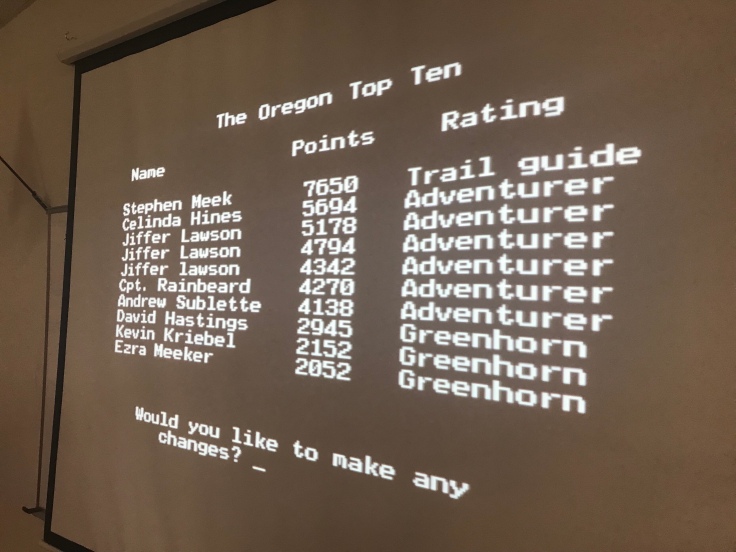 After spending my morning cleaning and picking up a few groceries, I’ve settled down with Smokey to watch “I, Frankenstein” on TV, alternating with the Liverpool-Newcastle Premier League match.