Like retailers changing one holiday for another, the Wheel of Time has turned ’round to Teaser Tuesday.

Some of you might know of Jenny Lawson, aka The Bloggess. She’s well-known for shining a humorous light on mental illness. She doesn’t make fun of mental illnesses, but rather uses humor to explain it. Anyway, this last week was her 4th Annual Booksgiving, and I was lucky enough to have someone send me her book Furiously Happy.

In Furiously Happy, a humor memoir tinged with just enough tragedy and pathos to make it worthwhile, Jenny Lawson examines her own experience with severe depression and a host of other conditions, and explains how it has led her to live life to the fullest:

“I’ve often thought that people with severe depression have developed such a well for experiencing extreme emotion that they might be able to experience extreme joy in a way that ‘normal people’ also might never understand. And that’s what Furiously Happy is all about.”

Jenny’s readings are standing room only, with fans lining up to have Jenny sign their bottles of Xanax or Prozac as often as they are to have her sign their books. Furiously Happy appeals to Jenny’s core fan base but also transcends it. There are so many people out there struggling with depression and mental illness, either themselves or someone in their family—and in Furiously Happy they will find a member of their tribe offering up an uplifting message (via a taxidermied roadkill raccoon). Let’s Pretend This Never Happened ostensibly was about embracing your own weirdness, but deep down it was about family. Furiously Happy is about depression and mental illness, but deep down it’s about joy—and who doesn’t want a bit more of that?

The Truly Random Number Generator sends us to page 43:

Review: The Field of Blood by Joanne Freeman 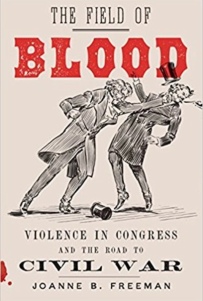 If you think Congress is uncivil today, you have no idea how bad it used to be. Describing scenes more at home in an Old West saloon, Freeman examines and explains the culture of violence that permeated Congressional “deliberations” in the early Republic. Though a large portion of this book is comprised of notes and citations, it is nonetheless a roaring read that should appeal to both academic and amateur historians.