They provide both intellectual stimulation and relaxing entertainment.

Specifically, National Public Radio is an intrinsic part of my life.

Note to prospective interns: Everyone starts with how they heard NPR as kid in the car on the way to school. Don’t! Find a way to stand out!!

Eg, “I listened to NPR without being strapped in and forced to, a la Malcolm McDowell in ‘A Clockwork Orange’.”

The more I thought about National Public Radio, the more I realized I’m not necessarily the typical NPR listener.

I’m a white, lower-working class male. Registered as an Independent, I tend to vote for the most libertarian candidate in primaries and local elections and the more conservative candidate in general presidential elections.

I tend to oppose most federal government programs and agencies on principle alone; it doesn’t matter which party is in power or who came up with it. The more wealth and power my local government retains, the better. I’m not even a huge fan of state governments, but then again the states I’ve lived in have been no great shakes, either.

I generally oppose abortion and am a lifetime member of the NRA. I want the 16th and 17th Amendments repealed, support a strict reading of the Constitution, and consider Social Security the greatest Ponzi scheme ever implemented on American soil.

So, how did I come to love National Public Radio, an entity that many would say embodies values contrary to my own?

It started as an act of rebellion.

I grew up in rural Pennsylvania, an area once dubbed “the last undeveloped / underdeveloped region within 100 miles (as the crow flies) of New York City.” Our relatively isolated community of religious farmers somehow hung on after the Pennsylvania Coal Bust and relied on I-don’t-know-what to survive. Grit, determination, and pure stubbornness, most likely. Needless to say, this environment wasn’t exactly conducive to original thinking.

My parents, though, let me read pretty much whatever I wanted. I’m not sure if this was because they wanted to encourage my intellect or because they simply didn’t know what I was reading. I don’t think there was another ten-year-old Nietzschean existentialist in our county.

Yes, I read philosophy for fun. My first book report? The complete and unabridged Moby Dick. In second grade. At 8-ish, I held a two hour conversation on the political theory of Animal Farm with some stranger sitting next to me on a flight to California. I digress.

The point is, I didn’t think like other people I knew, and I sought ought other people who might think differently. I don’t know how I found our local NPR station, but once I did, I was hooked.

Under the covers with the radio turned low and pressed to my ear, I listened to 90.5 WJFF, the hydro-powered station out of Jeffersonville, New York.  If there was any doubt the station subverted our community’s conservative values, the shows it aired supported Bill Clinton and promoted the “Day to be Gay in the Catskills.”

The station changed me.

I discovered a variety of classical music and developed a love for opera.

My dad once caught me listening to jazz way past my bedtime. Imagine my surprise when he asked

Have they ever played “Take Five”?

I love that one.

Maybe Mom and Dad weren’t as clueless as I thought . . .

Tuesday nights I listened to Loafer’s Glory: The Hobo Jungle of the Mind, my introduction to Worker’s Unions, bluegrass/folk music, and America’s working-class brand of socialism/communism. The program didn’t make me a Marxist in any way, but the music stayed in my blood. Though I only heard it once, I still remember one particular song, “Three Foot Seam” to this day.

While Mom and Dad watched Peter Jennings on ABC, I listened to All Things Considered and Weekend Edition with Liane Hansen. Yes, I played the Weekend Puzzle with Will Shortz, sometimes emailing my answer and sometimes sending it in via postcard. Though I often figured out the correct answer, I never won. Ah well.

Diane Rheem and Fresh Air with Terri Gross provided the soundtrack to my carpentry projects.

All these things combined to show me something: I could fundamentally disagree with someone and still like them. People can possess different opinions and still have meaningful discussion. Thanks to NPR, I refuse to live in an echo chamber.

I’ll admit, there was a time NPR was decidedly left-leaning. I think those days are over; my opinion today is that NPR is more centrist than in the past. That, or my own views have changed. Maybe both.

So I listen to Morning Edition on my way to work, where I then see what’s on CNN, the BBC, Deutsche Welle, and even Fox.

On my way home I’ll catch the end of Fresh Air or the first hour of Science Friday, a show I love even though one of their call screeners once said my views weren’t exactly what they were looking for in a given segment. I’m not sure if it was on evolution or homosexuality; it was several years ago, and they wanted a religious conservative to comment or clarify some things. After listening to the calls that were aired, I determined it’s because I wasn’t belligerent enough.

Car Talk reruns; Wait, Wait . . . Don’t Tell Me!; Ask Me Another; and Prairie Home Companion are my weekend retreats.

Other programs I enjoy are Exploring Music with Bill McGlaughlin, Harmonia, and Pop Culture Happy Hour. 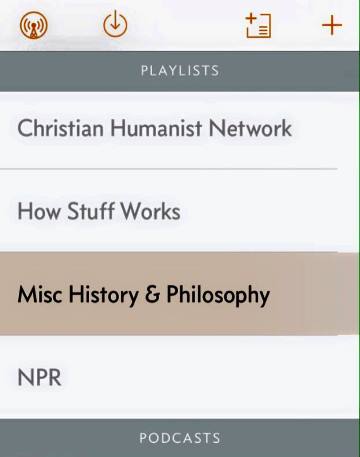