Some time ago – I forget when or where – I saw this sign: 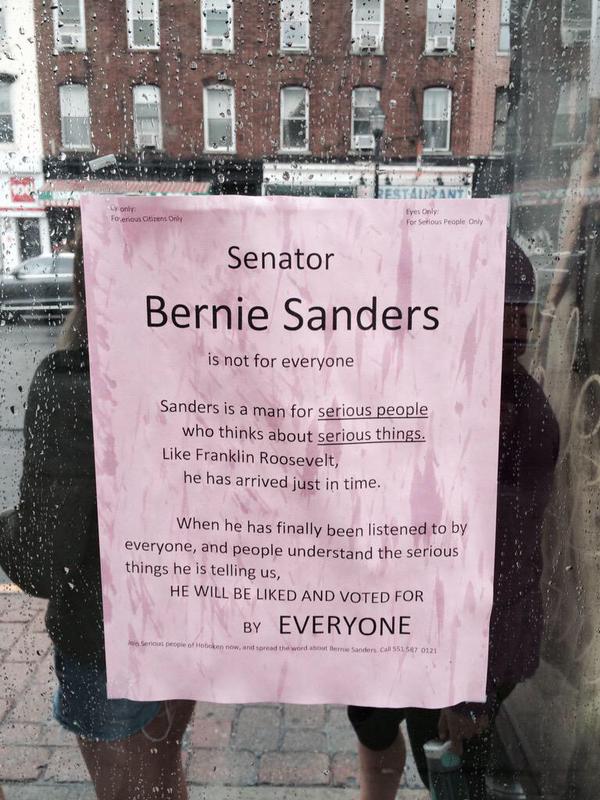 Eyes Only: For Serious People Only

Senator Bernie Sanders is not for everyone

Such as those that prefer their presidential candidates not look like Staler or Waldorf,

and even some Democrats.

You know, I don’t know of a single President who won with 100% of the popular vote.

Sanders is a man for serious people who thinks about serious things.

Second, there’s something grammatically incorrect about this phrase. Either a comma needs to go between “people” and “who” or “thinks” must be changed to “think”

Like Franklin Roosevelt, he has arrived just in time.

Now, I don’t particularly like FDR, but supposing he was on the right track, I’d say he was a few years too late; after all, wouldn’t you rather have him stop the Next Depression before it starts? Unless, of course, you think it’s already begun.

When he has finally be listened to by everyone, and people understand the serious things he is telling us, HE WILL BE LIKED AND VOTED FOR BY EVERYONE.

Your psychic abilities are lacking, and caps lock remains unconvincing.

And just what is the deal with the odd center/indented formatting?!?

2 thoughts on “A Serious Poster for a Serious Candidate”