Thanks for stopping by; I’ve been looking forward all week to seeing you again. The coffee’s hot and fresh, and I’ve no where to go today.

This week was long. Not bad, mind, but long.

Last weekend I battled the sickness. Krystal made it all the way to the fever stage and suggested I take preventative medicine. Sunday I woke up to the body ache stage, where simply being conscious hurt. Thankfully I didn’t advance to the fever stage.

I didn’t post a Teaser Tuesday this week; instead I tried caught up on my reading schedule, finishing Medieval Wisdom for Modern Christians and Norse Mythology. I’ve made good strides with my ARC of The Gulf, but so long as I finish before the end of February, I’m good – it’s released in March. Despite the large physical TBR in my living room, I brought more books from from the library. I think I may have a problem.

The school week was tiring. What else is new, right? Well, this week starts basketball tournament season: this week is the Junior Varsity and nest week is the Senior Varsity. Needless to say, emotions are high.

Then, my office keyboard decided to act up. There I am, typing along, when the computer dings and the entire keyboard locks up and the only thing the mouse’ll do is open the first button on any given program. I’m a fairly savvy tech troubleshooter, but even I can’t figure out what’s causing this. Sticky keys disabled, no viruses or malware, no error messages to decode. So I call in the actual IT guy, he tells me he reset some settings, and to let him know if it happens again.

Friday was a Dress Down Day, so I wore this:

Students either found it hilarious or slightly offensive. Those who found it offensive obviously haven’t been listening to me all year. But I think they knew that and were just pushing buttons.

Also on Friday I started teaching WWII and covered Pearl Harbor. It was rough, but my kids understood.

Oh, I hit two things with my car this week. Not exactly hit, tapped is more like it.

First, a deer was crossing the road without looking both ways before crossing. Thankfully, I saw it long before it started to cross the road and was merely creeping along when it decided to make a run for it. I definitely heard it hit, but it went on its merry way leaving a very tiny black mark on my front fender. No harm no foul?

Second, on Friday I found myself driving behind a Pepsi delivery truck at 6 in the morning. The roads in our area are horrendous – hey! my nearest main street is up for resurfacing: huzzah! – and it hit a pothole, knocking off a hubcap. It rolled down the road and, not having time to slow or swerve, I hit it. Apparently it had quite the momentum, for I saw it continue rolling down the street into the early morning darkness. Run free, not-so-little hubcap, run free. 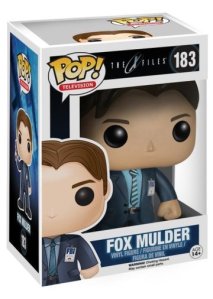 Last night Krystal and I went shopping. We finally upgraded our phones to something actually being updated, ate a late Valentine’s Day dinner at Applebee’s, and then found a Mulder POP! figure on clearance at Books-A-Million. I did not buy any more books, to Krystal’s great enjoyment.

This week I’ve been binge watching The Golden Girls on Hulu, and now you know how I’ll be spending my long President’s Day weekend: reading, grading, an watching the antics of Rose, Dorothy, Blanche, and Sophia.

Smokey just settled in my lap. I suppose he waited since he’s already heard my stories.

Now, we both want to hear yours. What did you do this week?