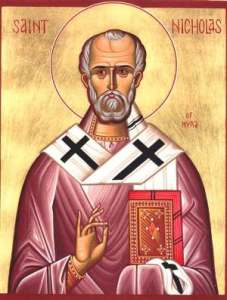 Today is Wednesday, December 6, 2017 and St. Nicholas Day. It is time once again for me to tell you the REAL story of St. Nicholas, or at least a tale more accurate than the usual Christmastime fare.

Clement Moore perpetrated a great crime against Church history when he penned and published the poem “A Visit from Saint Nicholas” in 1823. The mostly-benevolent Church Father known as Saint Nicholas of Myra was replaced with a magical man and equally magical reindeer who should – according to the laws of physics – immediately burst into flames and crash back to earth in a flaming ball of death and destruction the moment they attempt takeoff, simultaneously wiping out elven workshops and delivering barbecue to the North Pole. (I can only imagine Saint Nicholas’ reaction to this development . . .)

A Visit from Saint Nicholas

‘Twas the First Council of Nicaea, when all through the Church
Every Christian was stirring, and starting research.

The Church Fathers had chosen their sides with great care,
For Nicholas of Myra soon would be there;

The Elders were settled all smug in their doctrine,
While allegations of heresy swarmed like a toxin;

Constantine in his robes and Bishops in caps
Were just praying the Church wouldn’t collapse.

When out of debate there arose such a clatter,
All heads turned around to see what was the matter.

Away to the Council I flew like a flash,
Threw open the doors and stopped in my tracks.

The lamps in their sockets were all aglow,
Giving lustre of mid-day to objects below,

Well, duh. That’s what lamps are for, right?

When, what to my wondering eyes should appear,
But a lively Church Council – no longer austere –

And a stately Church Father, so lively and quick,
I knew in a moment it was Bishop Nick.

More rapid than eagles his discourses came,
And he whistled, and shouted, and I heard him proclaim:

“The deity of Christ cannot be refuted;
Equality with the Father cannot be disputed!”

From the back of the pack there came a loud call:
“That’s not what I think; no, not at all!”

As dry leaves that before the wild hurricane fly,
When they meet with an obstacle, mount to the sky;
So up to the naysayer Bishop Nick flew,
With a fist full of fury (and righteous wrath, too).

And then, in a twinkling, I heard a great “Oomph!”
We’re lucky that Nick didn’t kill the poor doof . . .

Constantine and the Bishops all gathered around,
And kicked Nick to the curb like an unwanted hound.

He was thrown into prison and stripped of his office,
His pallium confiscated – so were his Gospels.

Not quite the Santa you remember, is he?

He was left with only the clothes on his back –
Even a beggar had more in his pack.

But his eyes—how they twinkled! his dimples how merry!
His cheeks were like roses, his nose like a cherry!
His droll little mouth was drawn up like a bow
And the beard of his chin was as white as the snow.

Arius was in favor of kicking his teeth,
But he was outvoted and started to seethe:

“Nick doesn’t deserve proper food for his belly,
Why don’t we just kill him? Someone, please tell me!”

It was then that they learned just how wrong they all were –
It all happened so fast, it seemed like a blur:

Christ and the Virgin visited his bed
– are we really quite certain this wasn’t all in his head? –

They restored his belongings and sent him to work
Helping poor children and building the Church.

And laying his finger aside of his nose,
And giving a nod, he walked down the road.

He rallied his strength, to his team gave a whistle,
And strait away they read from the Missal,

But I heard him exclaim, ere he trod out of sight,
“I’ll mess you up, too, should we get in a fight.”

Some Notes on Historical Accuracy

Obviously, I have taken some artistic license. In some cases I thought the original worked just fine. For your consideration:

The Constantine mentioned here is Constantine I, founder of New Rome (aka Byzantium, Constantinople, and Istanbul).

By all accounts Arius was speaking when Nicholas couldn’t take it any more and laid into him. That just didn’t work for me. Oh well, deal with it and move on.

I really don’t know how Arius reacted to getting punched in the face. His response is based on what my reaction would have been. Honestly, how would you have reacted?

Although I have Nicholas’ followers reading from the Missal, I don’t think it existed at that time. However, neither do flying reindeer, and you probably like that poem just fine, don’t you?

Anyway, now you have a semi-historical background for the real Nicholas. Combat ignorance and share it!