The week was busy; you’d think I’d enjoy having some time off right at the beginning of a school year (several of my classes were cancelled due to fields trips), but reality dictates that deviations from routine must result in tiredness. Such is life.

So, what did I do this week?

I wrote lesson plans, prepared projects, caught up on grading, and found some time to read. I also wrote a more student-friendly adaptation of “The Story of the Flood” from The Epic of Gilgamesh.

One of my coworkers brought in a cheesecake for her birthday. She didn’t want us to know ahead of time (at least, I didn’t know), yet she brought in food to celebrate. It went well with this Dunkin Coffee the same teacher gave me for helping her with our upcoming Veteran’s Day program. 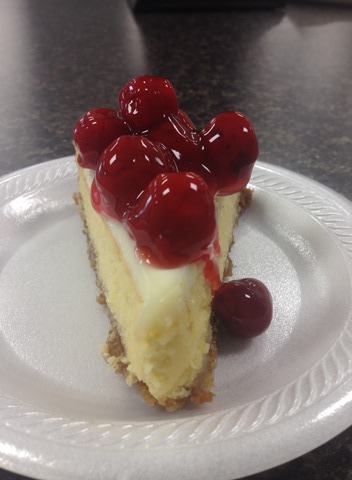 Friday marked the 14th anniversary of 9/11. I remember where I was at 8:46 that day – I was at the dentist, just as I was for the Oklahoma City bombing, the attack on the USS Cole, the Atlanta Olympic bombing, and at least one other tragedy I’m forgetting. For the first time, none of my students were alive on 9/11/01; does this officially make me “old”? I imagine this is how others remembered Pearl Harbor or the Kennedy assassination. I was responsible for placing the flag at half-mast fourteen years ago. Today, I did so again.

This weekend I began working with K and my cousins on a webshow (coming October 2015). Here are some of the promotional materials we developed:

Check out our website-in-progress and tell your friends!

On some of my downtime I surfed the net and messed around with Siri. Here’s two notable things I found:

What Did You Do This Week?