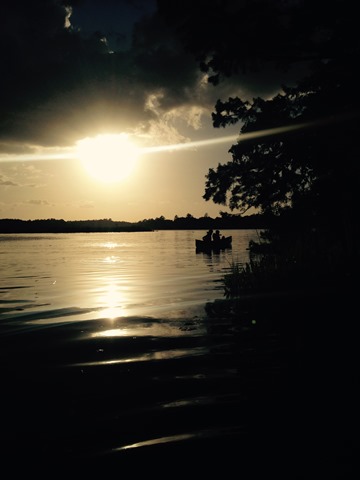 I don’t really know much about pirates, or pirate culture.
I’d be a contrarian pirate.
– Todd Barry

Last Saturday my wife, sister-in-law, and a few cousins decided to celebrate the cooler weather (i.e. under 85F with a breeze blowing) and go canoeing on the Trent River.

The water was high, which made getting the canoes into the water easier than usual. Somehow, my younger cousin and I ended up in the longer/heavier canoe with paddles intended for something entirely different. One of them was broken, too. When we finally caught up with the other canoe, we traded some paddles around to make things a little bit easier. Then we spent the next hour or so paddling around, exploring various inlets and swampy areas.

On that note, be it here proclaimed that we (my younger cousin and I) have first claim on the dead tree in the swamp by right of first landing and the shedding of blood. Not much blood, mind you, but enough to lay a more serious claim than the spit the others claimed overrode our “First Contact” right. As no additional claim was made, the tree is ours.

On the way back, we saw my Aunt (cousin’s mother) and her brother in a paddleboat.

Our pedals won’t turn and we need a tow back!

Now, both Aunt and Uncle have a habit of being jokers and the other canoe ignored them. Cousin and I went to check things out, and sure enough, their pedals were just fine. However, due to the length of our canoe and the insufficiency of our own paddles, Uncle grabbed hold the bow and began rocking the canoe back and forth.

I shut my eyes and silently screamed:

Whatever happens, just let it be over soon so this rocking’ll stop!

At this juncture, I should probably tell you I don’t really like the water. I’m not afraid of it – there’s a big difference between fear and hatred. I know how to swim, and I’ve talked before about fishing. I just don’t like being wet.

Aunt finally saw me turning green, convinced Uncle to let us go, and they pedaled away furiously. Well, they tried to pedal away. You see, while they were rocking our canoe, they also knocked the tie rope out of their boat. When they tried to get away from us, the rope wound in the paddle shaft and wedged it tight. Now they really were stuck.

I must admit I laughed at this instant karma:

And exactly why should we help you?

But, since they didn’t have an actual paddle (I’m pretty sure Cousin and I ended up with the “emergency” paddles from the paddleboat) and were about a half mile from the dock, Cousin and I worked their rope free so they could get back on their own power. Sure, we could have tied them to our canoe and towed them, but that would’ve been entirely too much work on our part.