This is the 37th Discworld novel and the 8th in the Rince-Cycle. 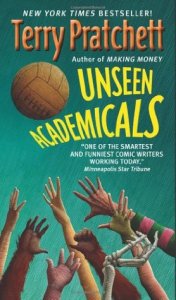 In fair Ankh-Morpork we set out scene:

Will Vetinari raise football from gutter game to spectator sport?

Lovers meet, but can their love cross team loyalty?

Can the leopard change his shorts?

And speaking of shorts, what’s with micromail and the mysterious model Jools?

Might the Wizards go to war with the upstart scholars of Pseudopolis?

In this tale of affection, athletics, and ambition (and pie), it’s best to watch your front and your back in the Shove . . . and it’s all Shove.

The wizards at Ankh-Morpork’s Unseen University are renowned for many things—wisdom, magic, their love of teatime—but athletics is most assuredly not on the list. So when Lord Vetinari, the city’s benevolent tyrant, strongly suggests to Archchancellor Mustrum Ridcully that the university put forth a football team composed of faculty, students, and staff—or lose the funding that pays for their nine daily meals—the more-than-usually-at-sea UU wizards find themselves in a quandary. To begin with, they have to figure out just what it is that makes this sport of foot-the-ball so popular with Ankh-Morporkians of all ages and social strata. Then they have to learn how to play it. Oh, and on top of that, they must somehow win a football match without using magic.

She read the way a cat eats: furtively, daring anyone to notice.

When you have dived off a cliff your only hope is to press for the abolition of gravity.

Learning had to be digested. You didn’t just have to know, you have to comprehend.

Wizards always had a place in their hearts for cooks, because it was near their stomach.

The Librarian was not very familiar with love, which had always struck him as a bit ethereal and soppy, but kindness, on the other hand, was practical. You knew where you were with kindness, especially if you were holding a pie it had just given you.

You can rely on pies. Pies don’t give you grief.

Cunning: artful, sly, deceptive, shrewd, astute, cute, on the ball and, indeed, arch. A word for any praise and every prejudice. Cunning … is a cunning word.

Don’t be smart. Smart is only a polished version of dumb. Try intelligence. It will surely see you through.

It’s hard to hate people a long way away. You forget how dreadful they are. But you see a neighbour’s warts every day.

There are more things in Heaven and Disc than are dreamed of in our philosophies.

Beauty can be considered to be neutral, sir. It is not the same as nice or good.

I like the occasional bit of Sturm and Drang, but Lord Vetinari is a tad particular about that sort of thing.

Archchancellor, I see evil when I look in my shaving mirror. It is, philosophically, present everywhere in the universe in order, apparently, to highlight the existence of good. I think there is more to this theory, but I tend to burst out laughing at this point.

Well, of course, classically, gods play with the fates of men, so I suppose there is no reason why it shouldn’t be football. We play and are played and the best we can hope for is to do it with style.

Juliet’s version of cleanliness was next to godliness, which is to say it was erratic, past all understanding, and was seldom seen.

Oh, you know the sort of thing if you read the papers a lot, said Ponder. I seriously think they think that it’s their job to calm people down by first of all explaining why they should be overexcited and very worried.

No civil police force could hold out against an irate and resolute population. The trick is not to let them realize that.

If you try to take my bananas from me, I will reclaim them from your cold dead hands.

Previous: Making Money | Next: I Shall Wear Midnight

One thought on “The Quotable Pratchett: Unseen Academicals”