It’s Sunday Morning, and that can only mean one thing: last night, I ate a hamburger. Specifically, a burger featured on the hit series Bob’s Burgers.

About the Episode – Linda embraces her dream of dinner theater with the help of Mort’s “props”, but Bob is none too convinced – especially when an unexpected, unwelcome guest steals the show (and the cash from the register).

About the Burger– This burger was topped with a homemade cucumber, dill, and radish crème fraîche and served on a French style hamburger bun. 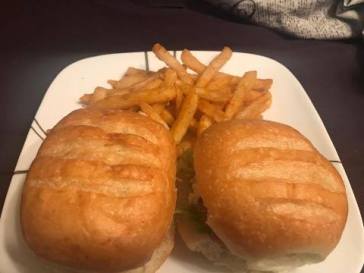 We’re not sure what happened, but this burger just wasn’t good. The burger itself was good, but the topping was bland. In fact, it had negative flavor, seemingly sucking the flavor from the burger itself. Even adding cheese, more salt and pepper, and other condiments didn’t help.

We didn’t even finish the burgers, but broke them up and gave some to Smokey. He, at least, ate some.

The other burgers we’ve had so far have at least been edible, but this one was a dud.

Come back next week, when we’ll try the “Poblano Picasso Burger”