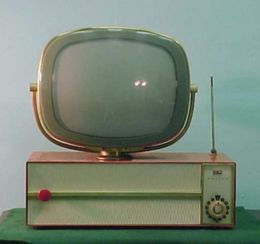 Once again, it’s time to see how much you think you know me.

I have actually seen NYC from the crown of the Statue of Liberty twice and have the photos to prove it. They’re in a box in the attic; if I can find them, I’ll post them.

Indeed, I became stuck in the revolving door at Tiffany’s thanks to an errant strap on a friend’s backpack. The strap became stuck in the mechanism and I was trapped for several incredibly long minutes while security directed customers to a regular door and maintenance cleared the door and got it moving again.

Coincidentally, that same friend and one of his cohorts threw pennies off the observation deck of the Statue of Liberty, but I was not involved. I knew about it first when I overheard the Park Rangers talking on their radios.

So, it appears I fooled all five respondents.

And now, Round Three

This week, let’s talk about the Idiot Box: