As a combined birthday/Christmas present, my aunt Rose, uncle Jason, and cousin Alex took me on a four-day road trip to Washington, D.C. Yes, it’s true – this history teacher has never been to our nation’s capital. Well, now I have, thanks to their generosity.

Rather than write one huge post, I’ve decided to break it down and devote a post to each day of the trip.

We headed out around midday on Monday. Alex and I rode in back and listened to songs and podcasts and discussed how to change out a hard drive on a PS4. Eventually he fell asleep and I read some. When we entered Virginia we stopped at a Wawa for drinks and snacks; in my opinion, Wawa has the best gas station coffee. It was a good thing, too, since almost immediately after stopping we hit traffic – almost an hour earlier than expected. We ended up sitting in two hours’ worth of 12-minute delays. I think by the time we actually got into D.C. we were behind schedule by an hour and a half. Well, we weren’t really behind schedule – we were taking things as they came with no real plan. Sure, we had a list of things to do, but the main goal of the trip was to have fun. 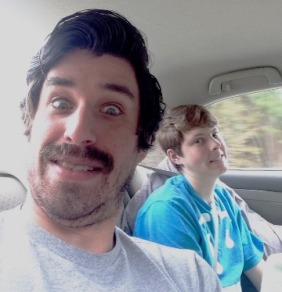 We drove into the city shorty at dusk, so we decided to walk through the memorials around near the National Mall. Our first stop was the Vietnam Memorial, which was rather difficult to photograph with my iPhone given the elevation and low light. We walked through and decided to come back in daylight.

The Three Servicemen at Night

We then walked to the Lincoln Memorial. Now, everyone knows I don’t particularly care for Lincoln; something about disregarding the Constitution during wartime rubs me the wrong way. In addition, I just can’t stomach the hero worship surrounding him – I’d go so far as to call it a Cult of Lincoln – which fails to recognize any fault whatsoever. Politics aside, the Lincoln Memorial is astounding, even if the design overuses the fasces. Seriously, there are fasces everywhere all over Washington. Anyway, you’re here to hear about my trip and see my photographs, not for a civics lesson. 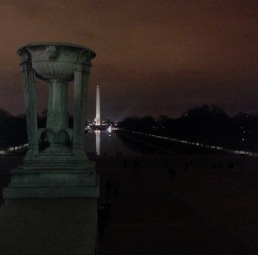 Lincoln on his Throne of Fasces 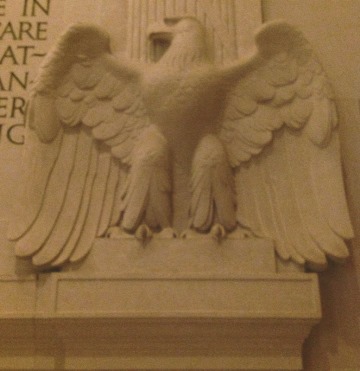 Strolling down the walkway by the Reflecting Pool, we found ourselves at the Korean Memorial. This was hauntingly poignant, beautiful, and tragic. My photographs do not do it justice. We found ourselves there at the same time as a guided tour, so while we could see everything, I didn’t have many opportunities for photographs.

Nearing the far end of the Reflecting Pool, we entered the World War II Memorial, which is simply massive (I found out it covers 7.4 acres!). Of all the monuments we visited, I spent the most time here, not just because of its size, but also because Mr. Tom served in the Navy in  WWII, being at Pearl Harbor when it was attacked, aiding the D-Day invasion (where his ship was sunk by mines/torpedoes) and throughout the Mediterranean, Atlantic, and Pacific. Even editing these pictures brought me back to the hushed awesomeness of this shrine, and I can’t help but to give thanks and tears for those who served. 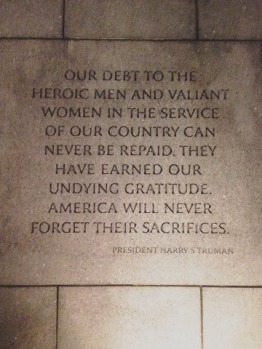 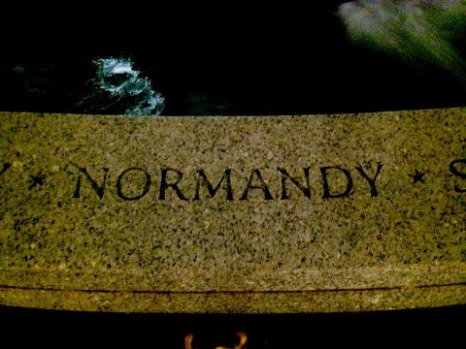 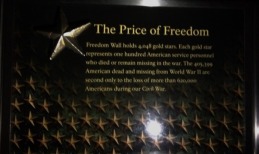 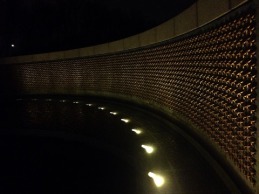 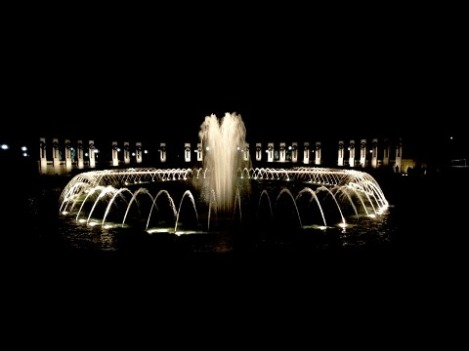 Exiting the WWII Memorial, we headed toward the National Christmas Tree, which was turned off just as we got there. Ah well. We saw the point at which all distances from Washington are measured, a building whose name I couldn’t find but what had an interesting door and lintel, the Second Division Memorial with its flaming sword, and on the way back to our vehicle we saw a monument to Amerigo Vespucci.

We drove to our lodgings and planned for our first full day in D.C., which would start with a trip to the Library of Congress.